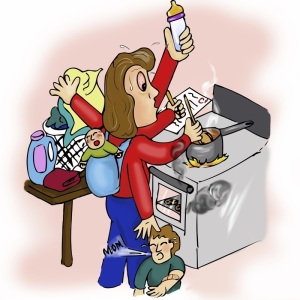 This morning I looked through some old files and came across this post that I wrote in November 2008.  It was a weird feeling getting an answer to my current prayers from my old self.  I decided to share it in case it’s helpful to anyone else:

One thing that motherhood has in common with any kind of challenging career is that it’s often overwhelming.  We feel pulled beyond our capacity to accomplish.  If you’ve had children, it’s guaranteed you’ve felt overwhelmed.  I’ve had several experiences that I think fall in the overwhelming category– sometimes I’m just overwhelmed by the tasks at hand and sometimes by my life in general:

Take Halloween night, for instance.  The dusk hour was approaching.  I picked up my brother from the airport.  I tried to throw the kids’ costumes together, but it proved more difficult than I’d expected because they were too excited to actually follow any directions.  At the same time I was trying to be a good hostess to my brother and get something going for dinner.  I still needed to get some towels and things into the guest bath.  Then my mother- and sister-in-law showed up with my niece who was as excited about trick-or-treating as my kids.  Mine were still half-dressed, but chomping at the bit to get out the door.  Plus I still had to get candy ready for a hand-out bowl.  And Matt was on his way home from school to go with all the kids.  For some reason, even though that moment was really insignificant in the grand scheme of things, I suddenly felt incapable of meeting everyone’s needs and I felt totally confused by all the chaos around me.  I didn’t know what to do next, and stuff just kept happening.  Doorbell rang.  Get candy.  Find socks.  Blow nose. Thank Grandma for presents.  Take candy away.  Find baby wipes. Answer questions. Try again.  Sound familiar?  Well, everyone finally made it out the door and the rest of the evening went on in relative peace, but that’s just one example of those frequent overwhelming moments that happen in the daily course of motherhood.

And then there are those overwhelming stages of life, like right after you have a baby and all the family who came to help out goes home.  I remember after I had Grant, I was sitting at the kitchen table eating food for the first time that day because someone had prepared it for me.  I knew my mother-in-law was going home the next morning and I thought WHAT am I going to do?  I was scared by the new reality and my lack of sleep/energy to deal with it.  But I lived.  Then about two and half years later, now with two kids, Grant had a bout with some seizures.  There was CPR and 911 and confused doctors at the ER.  I walked into the hospital room to see Grant convulsing and the doctors trying to hold him down.  I could tell they didn’t understand why it was happening and I was horrified.  I remember running out to the lobby and seeing my friend and my bishop and just shaking my head and saying “I can’t stand it.  I can’t watch!”  The next several days were spent in the Pediatric ICU with brain scans and spinal taps and all kinds of scary things.  In the end, everything seemed to be okay, and we hesitantly and hopefully took our little boy back home, crossing our fingers it wouldn’t ever happen again.  It didn’t.  But I’ll never forget that totally overwhelmed feeling I had about everything being so much bigger than me and out of my control.

Sometimes it seems like every time you turn around, something else is asked of you.  I recently read a talk by Henry B. Eyring called “O Ye That Embark.”  The subtitle quote says:  “Our power to carry burdens can be increased more than enough to compensate for the increased service we will be asked to give.”  This is a talk he gave to an audience of men, but anyone with half a brain can recognize that women deal with these same issues, so I was able to gain a lot from reading his lessons.  He says:

“It is not surprising that we feel from time to time nearly overwhelmed. Your thought that ‘I’m not sure I can do this’ is evidence that you are understanding what it means to hold the priesthood of God [or to fulfill your role as a mother–don’t you think that fits?]. The fact is that you can’t do it by yourself. The responsibility is too difficult and too important for your mortal powers and for mine. . . .When those feelings of inadequacy strike us, it is the time to remember the Savior. He assures us that we don’t do this work alone.”

I think if I reflect accurately on those overwhelming moments in my life– the big ones and the small ones– usually someone helped me through it.  Often it was the Savior who listened carefully to all the mumbled prayers under my breath and strengthened me, but other times a family member or friend stepped in and gave a hand.  Elder Eyring points out that this is just how it’s meant to be:

“ . . . there are more with you than those you can see opposed to you. Some who are with you will be invisible to your mortal eyes. The Lord will bear you up and will at times do it by calling others to stand with you. . . . That suggests at least two things. One is to recognize and welcome those whom the Lord sends to help us. The other is to see in every assignment the opportunity to strengthen another. . . . Time and again over your life, the Lord has been giving you the experiences to build strength, courage, and determination. He knew how much you would need that to serve Him. . . . I bear you my witness that when we give our all in [His] service, the Lord will give us all the courage we need and the assurance that He goes with us and that angels will bear us up.”

He certainly has faith in us and equips us to succeed, even when our circumstances seem overwhelming.  And what about our own expectations for ourselves?  I think we are our own worst enemy in that area.  I’m the only one who treats my to-do list like a divine decree and then considers myself a failure if it doesn’t all get done.  Unless those lists start appearing on my pillow right after I say my prayers, maybe I need to remember it’s all about what I expect of myself and not what God expects of me.  This scripture quoted by King Benjamin comes to mind:

“And see that all these things are done in wisdom and order; for it is not requisite that a man should run faster than he has strength. And again, it is expedient that he should be diligent, that thereby he might win the prize; therefore, all things must be done in order.” Mosiah 4:27

When I read that today, I realized something new.  I always thought that “in order” meant “organized,” like when you put your home in order, but maybe it just means one-at-a-time, like when you follow the steps of a recipe in order.  Just one thing at a time.  We don’t have to do it all or do it all at once.  That seems so much more manageable to me– just do one thing, try to do it well (not perfect), and then move on to something else.  I’m just going to assume that God understands that when you throw children in the mix, even getting one thing done can be interrupted 54 times, and I guess that’s where the “diligence” part comes in . . . just going back to the task and not giving up or losing faith (in God or in yourself).