When Deseret Book contacted me about reviewing Blackmoore by Julianne Donaldson and Books 2 and 3 of the Janitors series by Tyler Whitesides, there was some excitement at our house. I loved Donaldson’s first book Edenbrooke, and my sons Grant and Clark had already read Janitors book 1 and liked it. So we all agreed to read the books and collaborate on the reviews.

This is the story of Kate Worthington and Henry Delafield. She’s determined to not marry and travel the world, but her friendship with Henry has some unfinished business, and seems to be meddled with on all sides. She takes advantage of a long-awaited opportunity to spend the summer with Henry’s family at Blackmoore, their vacation home since childhood. It’s just as magical and mysterious as she always dreamed, but she’ll have to face both her feelings and her fears before she can truly figure out her future.

I liked this story, but found it much more predictable and regency-cliché than Edenbrooke. There were story elements reminiscent of Wuthering Heights, Emma, and even Jane Eyre–with some gothic undertones and a flawed, sometimes misinformed main character. I occasionally lost patience with Kate, and were she my friend in real life, I would think she cries too much, but I still cared enough about her and liked the story enough to be interested in how everything resolved itself in the end. It was an entertaining read, and can be easily recommended as a clean, “proper romance.”

The Elementary school Spencer and Daisy go to is no longer safe for them! It’s crawling with toxites (little monsters that breathe in student brain waves and breathe out drowsiness, distraction, and confusion)! The Bureau of Educational Maintenance is taking over the school and Spencer and Daisy must leave. There is only one place to go. New Forest Academy. Walter Jamison says a man named Robert Monroe is there. He’s a janitor. They must go to that school. It’s the only place that’s safe. They go to New Forest Academy, and but it has some of its own problems. Spencer and Daisy must work on staying alive more than passing tests!

Janitors 3: Curse of the Broomstaff

When my mom first told me we were getting a free copy of janitors 3, I was really excited. Not just because I like the series, mostly because my, ok let me get this right, my friend’s sister has a friend whose uncle is Tyler Whitesides. For those of you who are reading this, you have probably already read Janitors, and Secrets Of New Forest Academy (Janitors book 1 and 2). In Curse of the Broomstaff, Spencer, Daisy and their rebel friends, Walter, Penny, Alan, and Bernard must destroy all Glop, before it destroys education. It leads them to the Aurans, guardians of the source of the magical Glop. As it turns out, Spencer discovers his true powers as an Auran, and finally discovers how to get Marv out of the Vortex.

In my opinion, this book is for kids ages 8 – 12 (grades 3 – 6).  I liked this book because it’s creative, original, and magical. This is the best book in the Janitors series, but I’m sure book 4 will be better.

And there you have it, straight from the readers’ mouths. 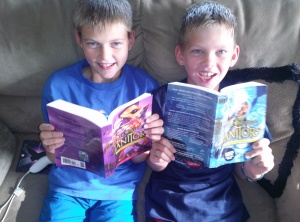