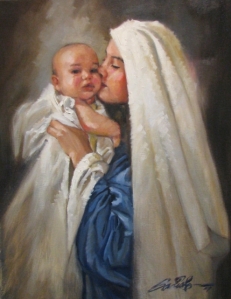 I’ve thought of Mary, too, this most favored mortal woman in the history of the world, who as a mere child received an angel who uttered to her those words that would change the course not only of her own life but also that of all human history: “Hail, thou virgin, who art highly favoured of the Lord. The Lord is with thee; for thou art chosen and blessed among women.” (JST, Luke 1:28.) The nature of her spirit and the depth of her preparation were revealed in a response that shows both innocence and maturity: “Behold the handmaid of the Lord; be it unto me according to thy word.” (Luke 1:38.)

It is here I stumble, here that I grasp for the feelings a mother has when she knows she has conceived a living soul, feels life quicken and grow within her womb, and carries a child to delivery. At such times fathers stand aside and watch, but mothers feel and never forget. Again, I’ve thought of Luke’s careful phrasing about that holy night in Bethlehem:

The days were accomplished that she should be delivered.

And she brought forth her firstborn son, and [she] wrapped him in swaddling clothes, and [she] laid him in a manger.” (Luke 2:6–7; italics added.) Those brief pronouns trumpet in our ears that, second only to the child himself, Mary is the chiefest figure, the regal queen, mother of mothers—holding center stage in this grandest of all dramatic moments. And those same pronouns also trumpet that, save for her beloved husband, she was very much alone.

I have wondered if this young woman, something of a child herself, here bearing her first baby, might have wished her mother, or an aunt, or her sister, or a friend, to be near her through the labor. Surely the birth of such a son as this should command the aid and attention of every midwife in Judea! We all might wish that someone could have held her hand, cooled her brow, and when the ordeal was over, given her rest in crisp, cool linen.

But it was not to be so. With only Joseph’s inexperienced assistance, she herself brought forth her firstborn son, wrapped him in the little clothes she had knowingly brought on her journey, and perhaps laid him on a pillow of hay.

Then on both sides of the veil a heavenly host broke into song. “Glory to God in the highest,” they sang, “and on earth, peace among men of good will.” (Luke 2:14, Phillips Translation.) But except for heavenly witnesses, these three were alone: Joseph, Mary, the baby to be named Jesus.

At this focal point of all human history, a point illuminated by a new star in the heavens revealed for just such a purpose, probably no other mortal watched—none but a poor young carpenter, a beautiful virgin mother, and silent stabled animals who had not the power to utter the sacredness they had seen.

How true it is that many of the greatest moments of motherhood are quiet and sacred.  Since most of ours are not accompanied by stars and angels, they are often unnoticed by the rest of the world, but not by God.  Mary’s most admirable quality to me is her trust in God, and her willingness to do what he asked of her even when it seemed nearly impossible.  Christmas is certainly about our Savior, Jesus Christ, but like most things worth honoring, it began with a righteous mother.

Merry Christmas!  Have a peaceful, happy and blessed celebration.  May you feel the Spirit of Christ and also, like Mary, a desire to be a woman who puts her life in God’s hands.  What better gift can we offer?